Part of the 17th International Workshop on Semantic Evaluation

Join Task Slack Channel to communicate with the organizers.

Due to the widespread use of the Internet and social media platforms, most languages are becoming digitally available. This allows for various artificial intelligence (AI) applications that enable tasks such as sentiment analysis, machine translation and hateful content detection. According to UNESCO (2003), 30% of all living languages, around 2,058, are African languages. However, most of these languages do not have curated datasets for developing such AI applications. Recently, various individual and funded initiatives, such as the Lacuna Fund, have set out to reverse this trend and create such datasets for African languages. However, research is required to determine both the suitability of current natural language processing (NLP) techniques and the development of novel techniques to maximize the applications of such datasets.

There has been a growing interest in sentiment analysis which applies to many domains, including public health, commerce/business, art and literature, social sciences, neuroscience, and psychology (Mohammad, Saif M, 2022). Previous shared tasks on sentiment analysis include Mohammad, Saif M et al., (2018), Nakov et al., (2016), Pontiki et al., Ghosh et al., (2015), (2014), and so on . However, none of these tasks included African languages. Though Mohammad, Saif, et al. (2018) included standard Arabic, we focus on Arabic dialects from African countries: Algerian Arabic and Tunisian Arabizi. We believe SemEval is the right venue, due to its popularity and widespread acceptance, to carry out shared tasks for African languages to strengthen their further development.

The AfriSenti-SemEval Shared Task 12 is based on a collection of Twitter datasets in 14 African languages for sentiment classification. It consists of three sub-tasks. Participants can select one or more tasks depending on their preference.

Given training data in a target language, determine the polarity of a tweet in the target language (positive, negative, or neutral). If a tweet For messages conveying both a positive and negative sentiment, whichever is the stronger sentiment should be chosen. This sub-task has 12 tracks:

Note: You are free to select one or more tracks in this sub-task.

Note: Tweets in each language are code-mix. Read our NaijaSenti paper for more information.

Given combined training data from Task-A (Track 1 to 12), determine the polarity of a tweet in the target language (positive, negative, or neutral). This sub-task has only one track with 12 languages (Hausa, Yoruba, Igbo, Nigerian_Pidgin, Amharic, Algerian Arabic, Moroccan Arabic/Darija, Swahili, Kinyarwanda, Twi, Mozambican Portuguese, and Xitsonga(Mozambique Dialect)):

Given a combined training data from 10 African languages, determine the polarity of a tweet in the target language (positive, negative, or neutral). This sub-task has only one track:

Given unlabelled tweets in two African languages (Tigrinya and Oromo), leverage any or all of the available training datasets (in Task:A ) to determine the sentiment of a tweet in the two target languages. This task has three (2) tracks.

Note: You are free to select one or more tracks in this sub-task.

The dataset involves tweets labeled with three sentiment classes (positive, negative, neutral) in 14 African languages. Each tweet is annotated by three annotators following the annotation guidelines in (Mohammad, Saif M, 2016). We use a form of majority vote to determine the sentiment of the tweet. See more in our paper (Muhammad et al., 2022, Yimam et al., 2020). Below is a sample dataset for the 4 Nigerian languges (Muhammad et al., 2022): 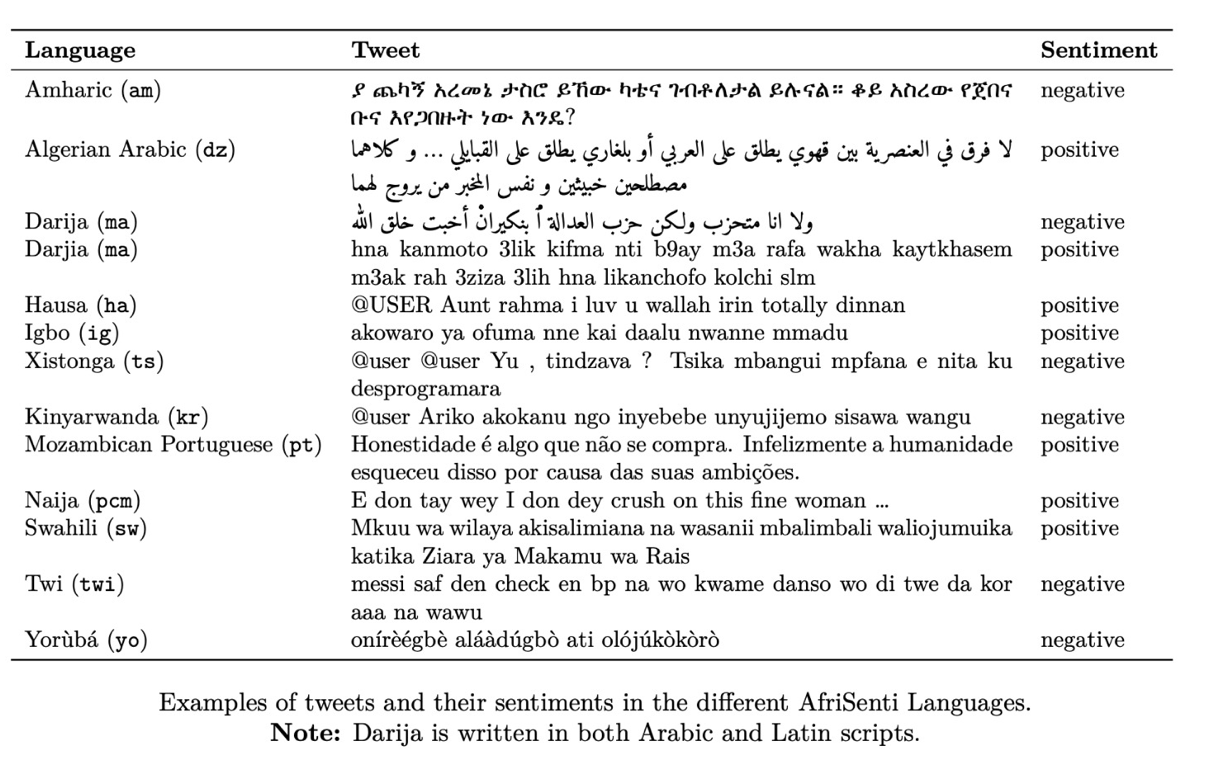 The datasets are available via the CodaLab competition website

We provide a Starter Kit on our GitHub Repo. The Starter Kit can be used to create a baseline system.

From here you can search these documents. Enter your search terms below.